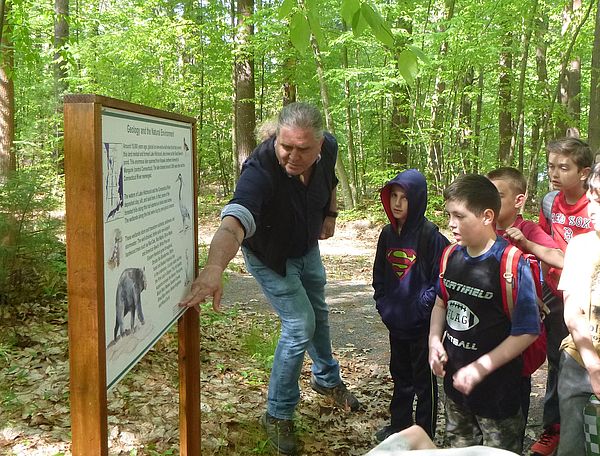 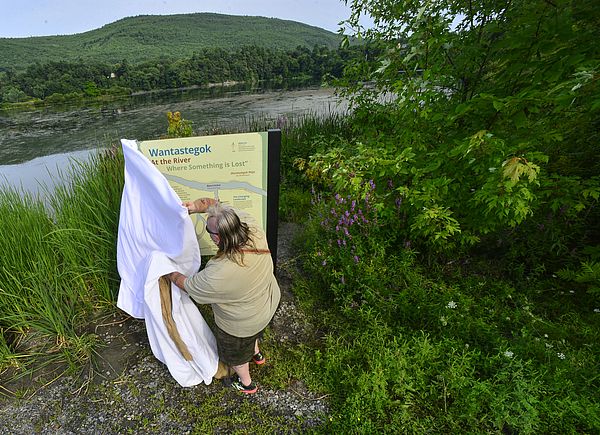 The Elnu Abenaki Tribe have partnered with Mount Grace since the early planning of the Gunnery Sergeant Jeff Ames Wheelchair Accessible Trail, which now guides visitors through a series of interpretive signs emphasizing the Abenaki’s continued connection to the lands that make up Squakheag/Northfield.

Elnu representatives worked with Mount Grace, and with the Wampanoag Aquinnah and Narragansett Nations, to describe the cultural importance of the Alderbrook Meadows site and helped design the educational signs for the trail.

This August, Mount Grace was invited to Vermont by the Elnu to witness the reclamation of Wantastegok--”at the river where something is lost”--the original name of the confluence of the West River with the Connecticut in Brattleboro.

Rich Holschuh and Chief Roger Longtoe Sheehan of the Abenaki joined with the Retreat Farm in Brattleboro to dedicate a marker near the confluence. The new sign recognizes the enduring relationship between the Abenaki and the land. By unveiling the sign, the Abenaki and the Retreat Farm, current stewards of the land, formalized their new partnership, which includes plans for a future Abenaki Trail, and other shared cultural resources, on the 140 acres of wetlands beside the two rivers.

These water meadows at Wantastegok were formerly rich farmland cultivated by the Abenaki for centuries. Petroglyphs near the original bank of the West River, submerged since the opening of the Vernon Dam in 1909, testify to the cultural importance of the site.

“We look forward to renewing connections between the Land and those who are here, breathing life into the stories that have sustained this Place," shared Rich Holschuh.

New collaborations like these can help recreate a fuller and more honest picture of the land we share and steward today, while honoring and reaffirming the traditional values and homelands of the Abenaki people.