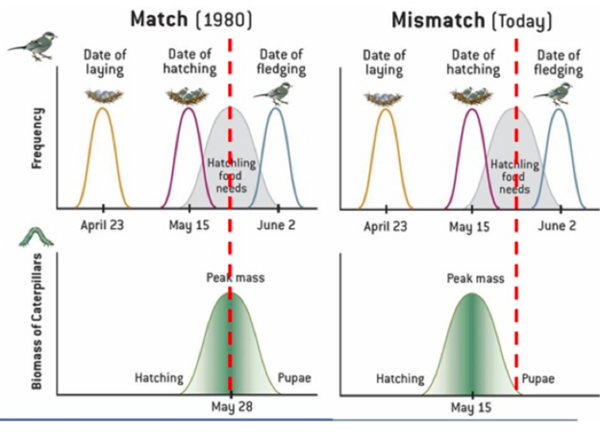 Mizumo Tomanti, B. (2017). Managing time in a changing world: Timing of avian cycle stages under climate change. University of Groningen.

Take a minute to think about the changes in nature that signify to you that spring has arrived. Maybe it is the sound of the spring peepers in the wetlands, the appearance of early spring flowers, the return of songbirds to our region, or the onset of pollen allergy season. All of these ‘happenings’ fall under the scientific term, phenology. Phenology is defined as the timing of life-cycle events such as flowering, reproduction, hibernation, and migration. Climate change is having a significant effect on the spring phenology of organisms.

On average, spring is arriving a week earlier now than it was 30 years ago, as measured by the last spring frost, and this means we are having warmer temperatures earlier in the season. Weather is more variable with the increasing frequency of periods of warm temperatures followed by a cold snap that can shock and damage sensitive organisms.  Climate change is also shifting rainfall amounts. In the northeast, we have seen almost double the spring rainfall amounts compared to what we were experiencing 30 years ago.

These changes are credited with causing phenological events to occur earlier. For example, four of our six frog species have started “peeping” 10-13 days earlier than they did in the 20th century. The magnitude of these phenological shifts is not equal across all organisms which can cause a mismatch between organisms that are dependent on one another. This is particularly worrisome for our migrating birds. While short-distance migrants have shifted their phenology, arriving about 12 days earlier than in the 1900s, our longer-distance migrants are arriving only 4 days earlier. Meanwhile, their food sources are changing their phenology at a different rate resulting in a decrease in available food sources when the birds arrive and their offspring hatch reducing reproductive success.

From a human perspective, changes in spring phenology are causing shifts in our behavior, our understanding of the natural world, and our economy. We may need to start taking our allergy medications earlier in the year, since the spring pollen allergy season is starting ~20 days earlier than in 1990. Farmers may need to adjust when they apply their pest controls and may be shifting their planting dates. The increased spring rainfall has reduced the number of days that a farmer can work the field and can cause increases in blights and disease. Climate change has impacted the fruit industry negatively. Fruit trees have shifted their bloom to earlier in the season in response to the earlier warm temperatures, putting the trees at increased risk for a spring cold snap. Cold damage to fruit blossoms has caused up to a 90% loss in fruit production for farmers. The changing spring climate is also impacting the maple syrup industry. Over a 30-year period of data collection, results are showing earlier onset of sap flow and a decrease in the optimal sap flow days.

Mount Grace will be working to better understand the impacts of climate change on the phenology of our forests through using our new remote sensing technology as part of our Remote Monitoring program. You can also get involved in collecting scientific data on spring phenology to help ecologists better understand the ongoing changes. The National Phenology Network has a citizens science program in which you can participate in data collection by recording phenological data on plants and animals in your own backyard.