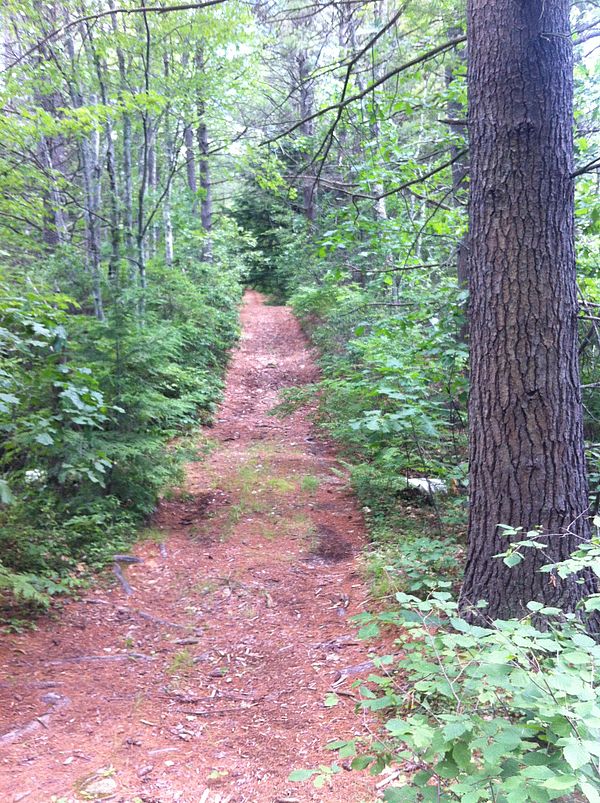 Our project will add two new trail segments to the 200-acre SACA. Construction of a visible parking area and trailhead on White Pond Road will provide access to more than five miles of public trails. The new trail sections will consolidate and tie in the existing trail network creating a 1.5-mile trail connecting White Pond Road to the trailhead at South Athol Road. Additional work will repair former ATV abuse, remove hazard trees, and open the trail system.

An exciting development in preparation of this grant was the E. W. Sykes Corporation’s offer to donate the 11-acre parcel of land over which one of the new trail sections passes to the Athol Conservation Commission. This parcel will consolidate boundaries, add 600 feet of frontage on South Athol Pond, and add over 1000 feet of frontage on Thrower Brook to the Commission’s protected open space.

Use of the SACA by ATVs is an ongoing issue. Enforcement of the ATV prohibition will be aided by adding proper signage. A kiosk with maps, boundary signs, and signage where the SACA trails enter adjoining trail systems will notify users of the SACA rules. Locus (you are here) maps within the trail system will guide users to the two parking areas and trailheads. Finally, a utility vehicle with trailer purchased through the grant will be used to monitor and maintain this network of trails.

One may ask why the state is investing in South Athol?

South Athol is a land of deep sands interspersed with wetlands, bogs, and streams. The large landholdings of Morgan Memorial and large tracts of private forest land provide a unique area of exploration for this naturalist, a place where Whip-poor-wills still sing.

The first evening rains of late March with temperatures of 38+ degrees usually finds me in South Athol for the migration of amphibians. After searching all over the North Quabbin region documenting this annual migration, I always return to my favorite sites in South Athol. The variety of frogs, toads, and salamanders never disappoint. One of the first to move, sometimes even over snow, is the state listed Jefferson Salamander. Jefferson’s are like spotted salamanders exchanging the bright yellow spots with flecks of blue. The discovery of this population piqued my interest in the area.

The South Athol area holds the state record 2lb 1 oz Sunfish caught in South Athol Pond by Heather Bulger in 1982 and a state record 76.5lb Snapping Turtle taken at Lake Rohunta. Rare species discovered include the endangered Ebony Boghaunter dragonfly and an endangered freshwater mussel. A single observation of an endangered Eastern Box turtle was made in the SACA. This species, which can live for over 100 years, may be a remnant of the former population or hopefully a part of rebuilding it.

Inspired by the work of Mount Grace and the State’s Tully Initiative protecting thousands of acres across the region, I wanted to draw attention to this area to see if we could do something to prevent this landscape from being exploited.

Serious work on conserving this unique landscape began in 1998 with a proposal by the Athol Bird and Nature Club (ABNC) to the North Quabbin Regional Landscape Partnership (NQRLP) to include this area as a project site. This recognition led to a grant from the Executive Office of Environmental Affairs for a wildlife inventory that shed light on the diversity of the flora and fauna. A 330-acre Forest Legacy Conservation Restriction was obtained in 2007 by Mount Grace on a portion of the Morgan Memorial parcel, and an adjacent 200 acres was obtained in 2015 with the help of Mount Grace to create the South Athol Conservation Area (SACA) for the Athol Conservation Commission.

SACA was created with combined acquisitions from the Leblanc and Stoddard families. A major landmark is a section of the old “Rabbit Run” railbed, that once carried passengers from Athol to Springfield, abandoned with the flooding of the Quabbin Valley. The railbed provides a tranquil path to enjoy the forests and wetlands. The multiple roads and trails through the area are well used by hikers, bicyclists, and equestrians.

With winter in full force, most of the improvements will begin in the spring of 2021. Volunteer days with members of Mount Grace and ABNC will join Athol Conservation members in sign posting, bridge construction, and trail mapping. The important part of this project is the recognition of the unique wildlife diversity of the area and that the habitat for Whip-poor-wills, dragonflies, reptiles, and amphibians will be forever protected.

As the pandemic breaks, we will have improved access to the South Athol Conservation Area for us all to explore.