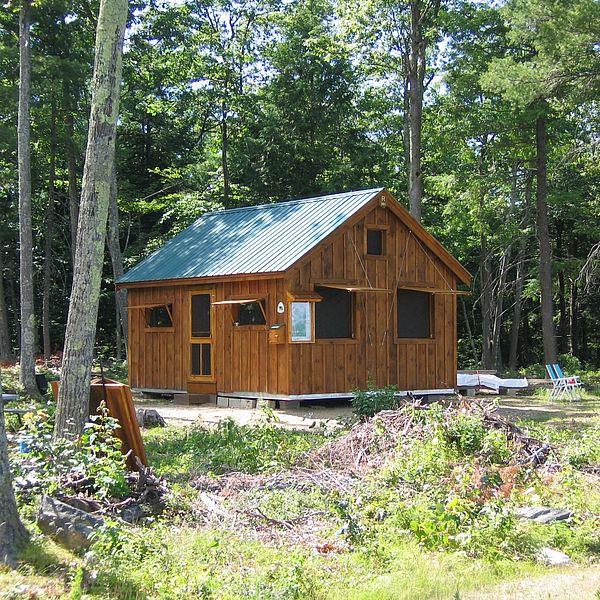 Mount Grace is officially the owner of the Richardson Overlook in Northfield, the crown jewel of the New England National Scenic Trail (NET). The campaign to purchase the 38-acre property began in early 2021 when Sam and Barbara Richardson asked Mount Grace to help ensure the continued stewardship of their land.

Sam and Barbara Richardson bought the land in 2001 and later relocated a section of the Metacomet-Monadnock (M&M) Trail, maintained by the Appalachian Mountain Club (AMC), onto the property. In 2009, the M&M Trail was redesignated as the NET through efforts led by Representative John Olver.

“We worked with Mount Grace to conserve our beloved property in 2011 as part of Mount Grace’s Metacomet Monadnock Forest Legacy Project,” said Barbara Richardson. “Since then, it’s been a labor of love to build a network of hiking and skiing trails, create this beautiful 180-degree lookout point, and construct a cabin and tent platforms on the summit with our friend Bob Zlogar.”

Thanks to the support of private donations and a public fundraising campaign, Mount Grace was able to complete the purchase of land from the Richardsons in June 2022. Community members showed enthusiastic support in March 2022 at a fundraiser hosted by The Brewery at Four Star Farms. The Northfield brewery created the Richardson Overlook IPA and donated $1 for every beer sold during the event.

“Sam and Barbara’s property was one of eleven properties—totaling nearly 1,200 acres—that were protected in that collaborative Forest Legacy project about a decade ago. That project wouldn’t have happened without partners, including the Northfield Conservation Commission, and it’s fitting that collaboration has played such an important role in the recent transfer of the property to Mount Grace. This type of landscape-scale conservation and stewardship depends on our ability to work together,” stated Mount Grace Conservation Director Sarah Wells.

Sam and Barbara Richardson’s enthusiasm for building and maintaining trails has been a model among the vibrant community of volunteers who help maintain the 215-mile New England Scenic Trail. Richardson Overlook hosts campers at a cabin and two tent platforms built with over 1000 hours of volunteer labor from the Appalachian Mountain Club Western MA Chapter.

“With its panoramic views of Mount Grace and Mount Monadnock and high-quality camping facilities, the Richardson Overlook property is host to the premier overnight site along the NET in Massachusetts. As a close-to-home long distance hiking trail, the NET is a treasure for residents of and visitors to the Connecticut River Valley alike. AMC is thrilled that Mount Grace has purchased Richardson Overlook, and we look forward to continuing to manage and maintain the NET and overnight facilities on the property,” said AMC’s New England Trail Coordinator Liam Cregan.

Mount Grace’s stewardship of the Richardson Overlook and the Richardson-Zlogar cabin is in collaboration with the Appalachian Mountain Club (AMC). AMC will continue managing the cabin and its associated camping, and the two organizations have written an agreement to guide their shared stewardship of the land and its important recreational resources. For information on renting the cabin and hiking the trail, go to www.mountgrace.org/richardson-overlook-1 or www.newenglandtrail.org